Joaquin Phoenix excels as a disturbed hitman in You Were Never Really Here by Lynn Ramsay.
Liza Dezfouli
[This is archived content and may not display in the originally intended format.] 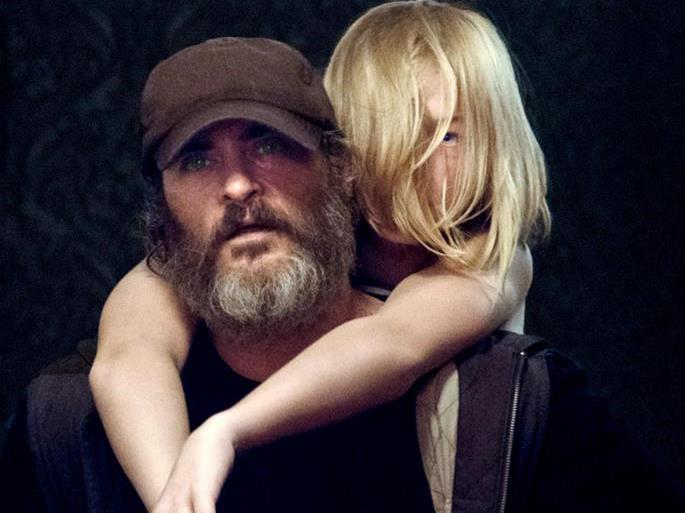 Joaquin Phoenix in You Were Never Really Here.

Ex-marine Joe, damaged and disaffected to the point where he’s convinced himself he doesn’t care whether he lives or dies, is called on to rescue a teenage girl, Nina (Eketarina Samsonov), from a pedophile ring. Although he cares for his elderly mother (Judith Roberts), Joe inhabits an amoral, depraved, increasingly violent world. His interior world is dominated by suicide ideation, flashbacks to an abusive childhood and to incidents in Iraq which are the source of his current post traumatic stress. Much of the tension in this film comes watching Joe’s tenuous hold on his own life tested over and over. Will he make it?

Joe’s face is often seen in chiaroscuro, in half shadow. Outdoor and indoor scenes are visually dominated by contrasts. The city is seen in cold hard greys, contrasted with the colourful scenes of pristine natural environments. Many shots involve dissolving visuals and reflections in glass, car mirrors, windows. We see reality constantly giving way; scenic visuals underlie Joe’s disintegrating sense of self as he manages his narcotics dependency as well as the horrors and dangers of his situation. We feel the threat of his impending failure to protect his mother or the girl. One indelible scene is extraordinary, shot under water where Joe embraces a body as he sinks. Another memorable intimate scene sees the state senator Votto, Nina’s father (Alex Manette), at play with a doll’s house.

Long intimate shots of the characters’ faces frequently take the place of dialogue. The entire film is characterised by a pared-down approach contributing to an experience of dynamic imaginative engagement for the viewer.

We have auditory contrasts supporting the visual dynamics: cheesy sentimental old songs suggest an ironic picture of a happy mid-American innocence that never was. Visual commentary on mindless consumption act on several levels, reminding us of the commodification of human beings, one of the film’s themes. In contrast to the musical schmaltz we hear discordant grinding guitar riffs, jarring electronic rhythms, and crushing piano chords. (The score is by Johnny Greenwood.)

The tension of the external events of the plot parallels that of Joe’s internal landscape. The film asks questions about how hard it is to be human in a brutal world. Once broken, do you stay that way? The interplay between Joe’s adult and Nona’s child is a strength of You Were Never Here, as are the tiny hints of their respective redemption towards the end.

Well, well worth the watch, this one. Phoenix is on fire with full deployment made of his skill and talent.

You Were Never Really Here