A strong young woman quietly resists gay conversion therapy.
Liza Dezfouli
[This is archived content and may not display in the originally intended format.] 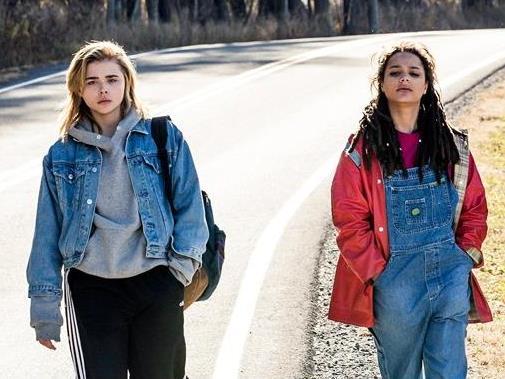 Chloë Grace Moretz and Sasha Lane in The Miseducation of Cameron Post.

Iranian-American writer-director Desiree Ahkaven gave the world the indie rom-com Appropriate Behaviour four years back. Her new film, The Miseducation of Cameron Post, won the Grand Jury Award at Sundance this year. This film, a collaboration between Akhaven and co-writer Cecilia Frugiuele, is an adaptation of a YA novel of the same name by Emily M. Danforth, set in the seemingly-distant pre-internet past, in 1993.

On prom night eleventh grader Cameron Post (Chloë Grace Moretz) is caught by her date making out with another girl Coley Taylor (Quinn Shepherd). Quickly Cameron’s guardian (Cameron is an orphan) decides that something must be done and arranges for her to move to God’s Promise, a Christian gay conversion camp.

Cameron is the voice of reason in the film, she’s presented as secure in herself, unusually so for someone her age. We don’t get to hear what Cameron’s feelings are about being made to move to God’s Promise or why she agrees to it, which contributes to the sense of mystery about her. She’s apparently biding her time until she can leave the camp. Cameron is marvelously self-contained and resilient. Her solid sense of self carries the film as she quietly navigates the culture of her new surroundings. Soon her self-sufficiency starts to threaten the other young people, and sharply undermines the mental gymnastics of the adults around her.

The film doesn’t give any explanation for Cameron’s preternatural maturity, it simply lets her character, unexplored to be sure, shine quietly in the darkness of the oppressive world she’s found herself in. Cameron’s smart enough to navigate her way through the group ‘therapy’ sessions the disciples’ endure, coming up with arbitrary and bogus reasons why she might be ‘suffering SSA’ (same sex attraction).

Jennifer Ehle (so sweet back in the day as Lizzie Bennett in the most famous television version of Pride and Prejudice), plays Dr. Lydia Marsh, an astute and psychologically manipulative camp counsellor; she’s dreadful, chilling and believable. ‘There is no such thing as homosexuality,’ she declares. With her apparently ‘cured-of-being-gay’ brother, Reverend Rick (John Gallagher Jr.), Dr Marsh set up God’s Promise to bring other young people ‘struggling with same-sex attraction’ to the righteous path with the help of the Lord. The young ‘disciples’ fill out mind-maps known as icebergs, designed to bring to light the hidden psychological influences ‘distorting’ their desires. Reverend Rick, in thrall to his powerful sister, has haplessly convinced himself of his ‘cure’. His presence is coloured by an aura of sad repressed loneliness. Even sadder and somehow inevitable is the disintegration of another character, one of the disciples.

Cameron finds a couple of like-minded peers, resistant to the brainwashing going on about them: a young woman called (yes, really) Jane Fonda (Sasha Lane from American Honey), and Adam Red Eagle (Forrest Goodluck from The Revenant) who identifies as a two-spirit. Jane is at first suspicious of Cameron as some of the young people have chosen to come to the camp and believe they should change, but the three soon become allies, bonding during long hikes to their secret marijuana plot in the woods.

For any young person going through anything similar – these camps still exist across the United States, and there are churches here in Australia employing unsavoury methods of ‘curing’ homosexuality – this story of a young woman so resolutely uncompromising in her sense of self and in her own truth is a godsend. All puns intended. The scenes of sensuality are nicely handled, avoiding any invitation to prurience.The Miseducation of Cameron Post ought to be shown in all high schools. Especially the religious ones, where of course it wouldn’t be screened.

The Miseducation of Cameron Post tells an ultimately triumphant story calmly and with underplayed conviction.