How to find footage for your documentary

Sometimes knowing where to start can be the hardest part. We speak to ABC Library Sales to see how the process works for filmmakers.
Brooke Boland
[This is archived content and may not display in the originally intended format.] 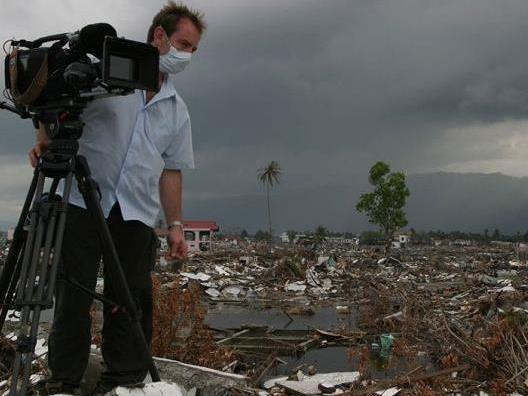 ABC was the first news agency to reach Aceh after the 2004 Boxing Day Tsunami. Andrew Taylor on assignment in Banda Aceh January 2005; Photo courtesy of ABC.

Unless you have shot entirely original footage for your documentary or film project, chances are you will need to hit the archives. But how do you find the right material?

If you want a feel for what the ABC can help with, a good place to start is on the ABC website, suggested Kortegast.

‘Our website provides a quick snap shot of the depth and range of content that we have in our Collections, available to access and license. Not only ABC footage, audio and stills, but also a diverse range of non ABC owned content (many surprises and gems there) that we represent.’

‘We’re always happy to discuss your brief, to canvass what we’re likely to have and what other areas might be worth pursuing.  We use a team of highly experienced footage researchers based in ABC Archives. Once you give us the green light you’ll be assigned a researcher who’ll organise shot lists, digital preview screeners as well as advise on rights and master formats.’

More than you think

‘Most often documentary filmmakers will come to us for our large archives on news, current affairs, and historical archives,’ said Maddy Kortegast
Senior Sales Executive of Library Sales, ABC Commercial.

‘Filmmakers usually have a very specific idea of the footage they want to use in their documentaries, or in early days to access content to inform their  research and direction.’

ABC footage is the source material behind many important recent documentaries including Chasing Asylum by award-winning filmmaker Eva Orner, and Baxter and Me directed by Gillian Leahy.

For her film on the refugee crisis, Orner accessed political speeches, news grabs, and refugee footage in order to cover how the crisis has been reported in the media and how politicians have handled the policy direction in the lead up to the situation we have today.

But there is even more than what you have seen on air in the archives. The ABC also keeps camera outtakes from some of their programs, said Anne Gilbee, Supervisor of Archives Research and Library Sales for Victoria.

Don’t just think history. Footage from contemporary programming is also available for filmmakers. Visit the ABC arts channel iview, where you can get an idea of what programs are available.

‘Don’t assume that we don’t have something, just come and ask us because it’s amazing the stuff that we find. You might think “There’s no way the ABC will have something on that” but then we look it up and sure enough there’s something there. It’s definitely worth coming to us,’ said Gilbee.

To find out more about the scope of content available, browse the available collection at https://www.abccommercial.com/librarysales/footage/collections

ABC licence fees and servicing charges are published on the website.

Add your details to the ABC contacts list to receive updates on the latest activities https://confirmsubscription.com/h/d/92EC0499077DED87

Brooke Boland is a freelance writer based on the South Coast of NSW. She has a PhD in literature from the University of NSW. You can find her on Instagram @southcoastwriter.